Stay up to date with my fitness journey on Instagram 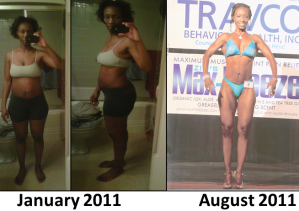 So, in January 2011, I had a revelation – I was quickly approaching 40, slowing down and getting fat! Something had to be done! So, I slowly started working out again, but that wasn’t enough. The weight was not dropping off at all! What was a girl to do! Well, I went to the Arnold Classics Fitness and Health Expo – YEP, THAT DID IT! I was going to become a Figure Competitor. I was so impressed and motivated by what I had seen! From March 2011 to August 2011, I dug in deeper and deeper. I consumed as much information as I could every single day and learned to eat right, or “clean,” and new ways to exercise to increase my metabolism and burn fat. In August, I competed in my first figure competition!

What do you think? Cancel reply

This site uses Akismet to reduce spam. Learn how your comment data is processed.